A Foucault pendulum, acting and reacting.

Do you think this is an apt metaphor for the development of artistic and intellectual movements over time?  Why or why not?

...we see patterns. During the 19th century, Romanticism's prevailing philosophies, values, and aesthetics appear to have been moving away from what came before... 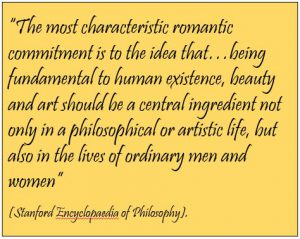 Article contrasts Diderot's and Rousseau's philosophies in the context of their approaches to the budding Industrial Revolution.

"Rousseau and the Revolt against Reason"

In particular, see this article's opening and conclusion.

"Ruskin and Beaudelaire on Art and Artist"

"Unmasking the Bourgeoise: The Romantic Era"

See first 3 sections regarding the importance of the individual in all aspects of life.

"The Influence of Romanticism on Nineteenth-Century British Social Work"

A country priest, the abbe LeFeuvre observed the following...

"The cold began to be felt at the end of October 1708, on the evening of the Feast of the Apostles Saint Simon and Jude, 28 October 1708. The wind shifted to the north, the rain that had been falling all day long turned into ice and snow, and one saw therein a warning of what was to happen later on because the snow, having frozen in the trees, weighed on them so heavily that branches as heavy as men were seen to succumb under the burden and fall to the ground, and I am an eyewitness that most of the oak trees of the parish were badly damaged.

Nothing withstood this cold; many men died of it, but to tell the truth not in the immediate vicinity; almost no birds remained; partridge were taken by hand or were found dead, together with other game, either as a result of the cold or because the ground was always covered with snow. But if only that had been the greatest evil! Wheat died and vines dried up; none of the large trees, neither the oaks nor the fruit trees, could withstand it; and the chestnut and walnut trees were especially ill treated. When one had confidence to venture out, one could hear the oaks breaking apart, and I have seen some open to a width of three fingers from top to bottom.

Finally, after three weeks of this cold, which increased continually, the thaw came. Its sad effects were not yet known. Work was begun on the vines in the usual manner, but this soon b

ecame impossible because the cold began again at the start of Lent toward the middle of February and lasted fifteen days in the same violent manner. The sun, however, was stronger and made the cold more bearable to men during the day, but much more damaging to what remained of the produce of the earth, which could not resist the terrible nights that caused almost everything to die, so that it was scarcely possible to gather enough to provide for next year's seed.

Wheat was soon at 28 livres the septier, and wine at 100 francs the pipe. It was hardly possible even for those who knew how, to find money, when there wasn't any. The number of poor people increased incredibly because the continuing rains of the previous year, 1708, had been very bad and had damaged the grain crops. . . . The poor of the countryside were destitute of any aid, no longer possessing a cabbage or a leek in their gardens, so they crowded into the cities to take part in the liberalities of the inhabitants, which were very considerable, at least in Nantes—for I cannot speak of other cities.

But they were soon begrudged the only help they had. They were forced, by the threat of great penalties, to return to their homes, and there soon appeared the most beautiful edicts in the world to help them, which, however, served only to increase their misfortune. Each parish was supposed to feed its own poor; but for this it would have been necessary for the poor to feed the poor. So these lovely edicts were without effect, and the only way to help the poor, by decreasing the taxes with which they were burdened, was never put into practice. On the contrary, they were increased."